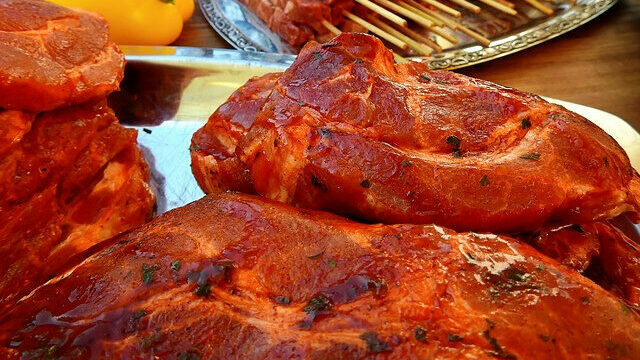 Adobo is a Spanish culinary tradition that goes back to the 1700s. The word ‘adobo’ literally means marinate, and it’s the practice of cooking raw meat in a spicy sauce for several purposes.

For starters, any piece of meat that spends some time in adobo is marinated beautifully, which means it gains a lot of flavor, but the technique also allows people to preserve their food. This was particularly useful before refrigeration. Chili peppers, vinegar and several spices are well-known antibacterials, so any meat maintained during winter in adobo could be enjoyed later on safely.

Today, adobo is a staple dish in Spain, Peru, the Philippines, Mexico, the Caribbean and every other Spanish influenced country, not without local distinctions and varieties. What is adobo spice? It can have many forms and can be made with a wide range of ingredients, but it always has something in common, it’s always delicious.

The Spanish adobo relies heavily on paprika and garlic, and it’s milder than other varieties. In the Philippines, a country influenced by the Spanish but also by Asian cultures, has a unique adobo based on soy sauce, vinegar, fish stock and seasonings.

In Mexico, adobo is a thick, spicy sauce made with various chiles, mainly the smoked chipotle and the dried ancho peppers, combined with tomatoes, garlic, vinegar and oregano.

It’s worth mentioning that although all adobos are distinct, they can be divided into dry rub adobos and ‘wet’ saucy adobos.

It’s easy to imagine the difference between dry-rubbing pork meat with adobo before grilling it, a common practice in the Caribbean islands of Puerto Rico and the Dominican Republic. Still, you can also see yourself simmering the pork meat in an adobo sauce like it’s done in Spain, Mexico or Peru.

What makes adobo so popular is its balanced flavors and warm aromatics. It’s hard to find a seasoning that’s spicy, hot, bitter, slightly sweet and tangy all in every bite. That’s adobo and more.

Adobo is hearty and satisfying; it can make from ordinary chicken or pork an extraordinary dish. You can also add every vegetable you have in hand, making from your adobo strew an entire meal.

If you’re wondering about Adobo’s spiciness, have no fear. The Mexican adobo might be the spiciest style. It’s made with dried and smoked jalapeño peppers called chipotle and ancho chile, but even in this case, both are relatively mild peppers with between 1000-2000 SHU (Scoville Heat Units).

We can agree that the paprika used in the Spanish version of adobo is quite mild as well but watch out: People can use all kinds of peppers in their adobos, including the fiery habanero and the scotch bonnet peppers — these are some of the spiciest peppers on earth.

Adobo is a very healthy way of cooking your meat. Very little oil is used, if any, so it’s just a hearty and colorful sauce packed with spices, hot peppers and herbs. Every ingredient is loaded with essential vitamins and minerals, but you’ll find the most health benefits in the hot peppers.

Capsaicin, the spicy compound in chili peppers, is a great pain reliever. It has sedative properties. There’s more, hot peppers improve your metabolism, making you burn calories faster, which might aid you with weight loss.

Capsaicin has anti-inflammatory properties, meaning it can reduce hypertension, joint pain and other disorders caused by inflammation.

It comes without saying adobo is a fantastic source of antioxidants. With so many herbs, spices and hot peppers, you get an antioxidant bomb that can fight scavenging free radicals that can damage your cells, causing several diseases, including heart disease and cancer.

The easiest way of getting to know adobo is trying it, in all its forms and flavors, from every country and culture. Adobo is an entire world to discover, and quite a tasty one too!

If you’re into cooking with spices, you might also enjoy making your own adobo. Source: chile ancho powder, turmeric, oregano, paprika, vinegar, garlic powder and basically everything your heart desires. Adobo is a hot pot for spices, and it’s hard to get it wrong.

If you go for an adobo dry rub, make yourself some succulent pork ribs. If you’re into adobo sauce, then stew a large piece of pork butt or chicken for the most flavorsome and tender meal. Once you cook with adobo, you never go back, let’s cook something spicy! Checout out our curated list of spices to buy by quality and flavour

🔥NEW PRODUCT ALERT 🔥ADOBO LATIN BLEND NOW AVAILABLE! 🌶 Crack open a cerveza and fire up the grill because things are about to get loco up in here. Our Adobo Blend packs the perfect punch of garlic, pepper, spices and Mexican herbs. This blend isn't just for making a killer Carne Asada...use it as a baseline seasoning for Pollo Asado, or use it to make the incredible latin stew, Carne Guisada. If you're a fan of Latin cuisine, this blend is a must-have. 👏🏼.
.
.
#spiceology #adobo #adobolatinblend #adoboseasoning #latinspices #latinseasoning #stewseasoning #mexicanhers #carneasada #spices #seasoningblend #meatseasoning #carneseasoning #chef #cheflife #chefspices #hospitality #restaurantproducts ...

Homemade Adobo (no Goya). Everyone is canceling Goya, so here’s your own homemade Adobo seasoning! Part 2 with Sazón coming soon ...

2 thoughts on “What is Adobo Spice and its First Origins”