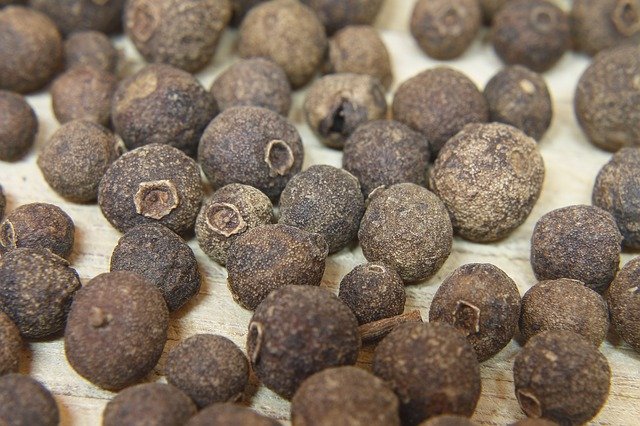 Allspice, what a great name, right? Allspice might indeed remind you of cinnamon, nutmeg, cloves, and pepper, but allspice is not a mix of spices but a superb spice with a broad range of aromas.

Allspice is actually a fruit. To be precise, a dried fruit just like black peppercorns, and it’s native to the Caribbean islands, mostly from Jamaica.

Christopher Columbus encountered this marvelous seasoning in one of his voyages during the late 1400s, but the English coined the actual name ‘allspice’ around 1621.

Although spice merchants fought hard to protect the allspice trade, cultivating it solely in Jamaica, today, the largest producers are India and China. Together, they export over 70% of the world’s allspice supply.

Allspice, also known as Jamaica pepper and pimento, is the dried fruit of the plant called Pimenta dioica. We’re talking of an evergreen tropical shrub that yields the prettiest tiny white flowers. Each flower eventually becomes a berry which is eaten and spread by birds.

These very same berries are what allspice producers harvest and dry. The secret to get the finest quality seasoning is protecting the aromatic oil eugenol in the fruits, responsible for the spice’s warm scents.

Today you wouldn’t recognize Caribbean traditional food if it weren’t for allspice, but many people use the aromatic condiment in European and Middle Eastern cuisines. Here’s how to cook with allspice.

How to Cook with Allspice?

You would think the sweet brown aromatics in allspice are better suited for baking treats, and you would be right. People often use allspice in aromatic treats like gingerbread, but the spice is very well represented in savory food as well.

The single most famous dish featuring allspice is Jamaica’s signature dish: Jerk Chicken. Allspice is a vital ingredient in the country’s jerk marinade sauce, along with the fiery scotch bonnet, garlic, brown sugar, and other spices.

Jerk Chicken might be famous but wait until you try a jerk seasoning in pork, fish, lamb, goat, and veggies.

Allspice, the dried berries that look like smooth peppercorns, are the most prized components of the plant, both whole or grounded into a powder, but the leaves are also used as if they were bay leaves to flavor stews, broths, and soups.

What is allspice? That’s a question that can’t be answered with few words because it’s not only a fantastic seasoning for sweet and savory dishes, but also a healthy ingredient to add to your diet. Here are some of allspice’s most important benefits.

Nutritionally, allspice is a super source for essential minerals. One hundred grams of ground allspice add 36% of your daily needed intake for manganese, iron 56%, calcium 66%, magnesium 36% and potassium 22%.

As for vitamins, allspice adds several B-complex vitamins to your diet and 65% of the vitamin C you need as well.

Allspice has adequate amounts of carbohydrates with 72 grams, from which dietary fiber comprises 21.6 grams. 6 grams of high-quality protein add up too.

Being a dried spice, all the nutrients are super concentrated, meaning even small amounts of allspice in your diet can have a significant impact on your health.

Allspice Is What We Call A Complex Spice

Allspice is unique. Few other herbs, spices, and seasonings have such a wide range of flavors and aromas. Be sure the checkout our curated list spices.

If you were to substitute allspice in a recipe, you’d need to add cinnamon, clove, nutmeg and perhaps some pink and black peppercorns; just then, would you achieve the same effect allspice has in your food.

This makes allspice an enjoyable spice to cook with, so try to incorporate it into your savory recipes and your baking projects.

Allspice is so versatile it should be your ideal desert island spice — the only seasoning you’ll ever need. A real treasure discovered in the sunny Caribbean islands.

Today’s rainy #sundaybaking called for this pumpkin olive oil loaf cake from yossyarefi—pure fall bliss! 🙌🏻 Cue “Stormy Weather” by Etta James + a warm cup of english breakfast and you have yourself a perfect day, friends. ❤️

SPICE GOALS! Our favourite spice girl is thrivingonplants after seeing the beautiful set up she has for her spices! Are any missing to make your ultimate spice collection?⠀
⠀
Get your hands on the recipe by tapping the link on profile!👆🏼⠀
—————⠀
👨‍⚕️👩‍⚕️ Plant-based doctors & health advisors: pbnhealth⠀
🏋️‍♀️ 💪Plant-based athletes, bodybuilders, and fitness tips: pbn.fitness⠀
Ethical & Vegan Beauty pbn.beauty ...

5 thoughts on “What is Allspice Seasoning & What are its ingredients”