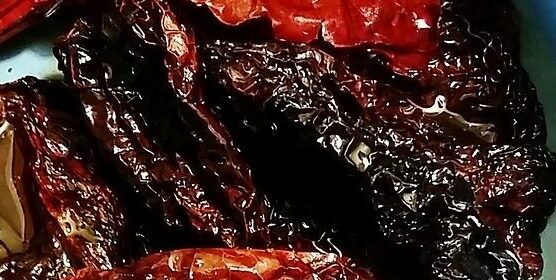 What is ancho chili powder? that dark, magical spicy powder that gives life to so many Mexican dishes? Well, the answer is simple. It’s powdered ancho chili peppers, but there’s lots to say about this noble pepper.

Like all chili peppers, the ancho chili comes from Mexico, where over 50 types of peppers are widely used while cooking breakfast, lunch and dinner. Mexican people do love their spicy food. It runs through their veins.

Here’s all you need to know about what is ancho chili, how to use it, how it tastes like, and much more. Welcome to the realm of Mexican dried peppers. Get ready for some heat!

What are ancho chili peppers?

On average, Mexican people consume 18kg of chili peppers every year, and it’s thanks to their creative ways of using them and the wide variety of peppers available. One of the most cherished is the Poblano pepper, green, fist-sized pepper that people usually stuff with seasoned minced meat.

Fresh peppers, large and small, are used every day in Mexican kitchens, but hot peppers are also dried. Dried peppers are much more shelf-stable than fresh peppers since you can store them for months. These peppers are the base of some of the most popular sauces and stews in the country.

The large Poblano pepper is also dried, and in the process, it changes its name. Dried Poblano peppers are called ancho chili peppers. The word ‘ancho’ literally means wide, and it’s easy to see why, they’re some of the largest peppers in the hot pepper catalog.

How is ancho pepper used?

Ancho peppers are key ingredients in Mexico’s famous mole sauces, including the remarkable black mole, typically served with chicken. It uses ancho peppers and four other dried peppers, along with nuts, raisins, tomatoes, a wide assortment of spices, and even chocolate. This is one of the most complex sauces on the planet. Sweet, savory, spicy, warm and coating, you have to try it to believe it.

Chile ancho peppers can be rehydrated and stuffed with all kinds of preparations. They’re then often covered with a thick sauce and served with beans and rice. You can also make an ancho pepper sauce by blending them with tomatoes, garlic and onion. It’s delicious over enchiladas.

Ancho peppers can also be grounded into a powder. Its smoky, slightly fruity flavor and very mild spiciness (ancho peppers have only 1000-2000 Scoville Heat Units) make it a delightful seasoning you can sprinkle over fruit or use it as a substitute for paprika in a wide variety of dishes.

All chili peppers are incredibly nutritious, and the ancho pepper is no exception. Chili peppers are mostly water with up to 88%, but all their nutritional values exponentially increase when dried. One hundred grams of pepper offer 385 kcal, 62.7 grams of carbohydrates, 11.5 grams of protein, and 9.8 grams of fat.

This gnarly, raisin-like dried pepper offers a healthy amount of vitamin A, with 1030mg, necessary for a healthy vision and immune system, plenty of vitamin C, which also supports your immune system and a wide variety of B-complex vitamins, including Thiamine and Riboflavin.

Vitamin K, essential to maintain healthy bones, is also present in ancho peppers, and as for minerals, potassium and copper are vast and available in the dried brown fruit.

Ancho peppers have large amounts of antioxidants, which protect your cells from oxidative stress caused by free radicals in your bloodstream, and they also have adequate amounts of capsaicin, the compound that makes peppers hot.

Capsaicin is a pain reliever that can aid with weight loss speeding your metabolism. It’s also a superb mood booster.

Where to buy ancho chili powder?

Hispanic markets are great places to buy whole ancho peppers, and since they’re shelf-stable, you can store them in your pantry for months without risking spoilage. You can also shop from are curated list of ancho chilli products.

If you’re not into spicy food, you’re missing out big time. A little heat is not only harmless but quite healthy, and since chile ancho is one of the mildest dried chili peppers in the market, it’s a fantastic starting point.

We could say ancho chili powder is an entry-level seasoning — the first step into the thrilling adventure that is adding hot peppers to your diet. Are you up for the challenge?

These days I have really been craving some ‘chiles rellenos’😋 – translated as stuffed chillies. But since poblano chillies are is not in season in Australia🇦🇺, I used its dry version which is easier to get.

The ancho chilli🌶 is a dried poblano, and although it is not very spicy, it is one of my favourites for salsas along with the chipotle, which is the dry version of the jalapeño.😁

This recipe not only combines two of my favourite dried chillies, but it is also very simple to prepare and has a spectacular sweet and smoky flavour🤩👌

What filling do you prefer to use for the stuffed chillies?

4 thoughts on “What is Ancho Chili”