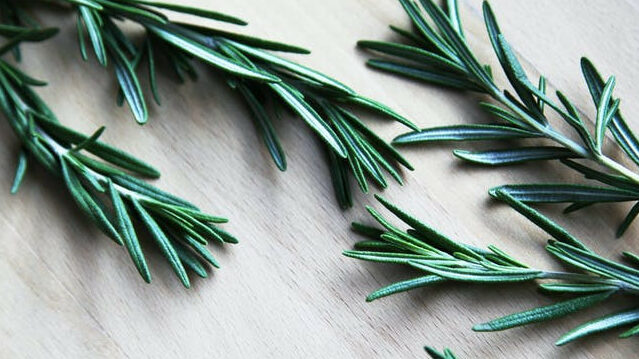 ‘Sea dew,’ that’s what rosemary means, and it’s so fragrant you can imagine yourself in the Mediterranean coast dining like a king with a glass of wine in hand.

Tunisia, Morocco, and southern Spain are the largest rosemary producer countries, but the spiny needles feel right at home anywhere around the Mediterranean Basin.

The herb might have Mediterranean roots, but it’s used worldwide, so if you’re still not familiar with rosemary, you’ll have no trouble getting your hands on the fragrant herb. Here’s all you wanted to know about what is rosemary herb and why you’ll love it.

What is Rosemary Spice?

Rosemary is an evergreen perennial shrub. It’s easily identifiable for its needle-shaped leaves and especially for its fresh piney and earthy aromas.

The Mediterranean herb is a member of the mint family, and unlike other herbs like basil, that has a two-year cycle, rosemary can live up to 30 years, making it a gardener’s favorite.

Rosemary is an ornamental plant that can potentially drive pests away, it is widespread in the kitchen, and Rosemary oil, extracted from the leaves, has alleged health benefits. It’s no surprise to see the aromatic herb on the top-five list of the most cultivated and sold herbs on earth.

The History of Rosemary

Rosemary has a lengthy history. It’s mentioned in a 5000-year-old Egyptian stone tablet and was commonly found in Ancient Egyptian burial sites. Pliny the Elder, perhaps the most notable naturalist of antiquity, spoke generously about the spiny herb, and so did all of its contemporaries.

The herb soon reached all corners of the known world thanks to the Roman Empire, and it was one of the first imports to the colonies. Today, rosemary is grown in all warm countries, and it’s widely used in South America, North America, Europe, and Northern Africa.

One hundred grams of dried rosemary leaves comprise 64 grams of carbohydrates, mostly in the form of dietary fiber, 15 grams of healthy oils, and 5 grams of protein, being the rest water.

Rosemary is an excellent source for vitamins, especially from the B complex, with 40% of the vitamin B1 (Thiamin) you need for the day, 30% vitamin B2 (Riboflavin), and an extraordinary 134% of vitamin B6.

As for the minerals in rosemary, the herb has surprising amounts of iron, with 234% the amount you need for a day, 128% of calcium, and 59% of magnesium.

Rosemary and rosemary oil have several uses in traditional medicine, and it’s mainly thanks to the carnosic acid, the bioactive compound in the herb. Here are the most common.

Rosemary oil is used in aromatherapy, as it is said to induce a state of relaxation that can reduce stress levels. It is often mixed with other oils to produce more powerful effects, including memory enhancing.

Rosemary has proven to effectively prevent mental disorders like dementia and improve cognitive functions, including memory.

When applied to the skin, rosemary oil could promote skin health and could even be used to treat skin cancer by slowing down cancer cell propagation. Other types of cancer could also be treated with rosemary extracts, an area with promising results.

Rosemary oil can be applied to the scalp to prevent hair loss and increase hair growth in people suffering from alopecia or hair loss.

There’s good evidence to back the claims of rosemary relieving joint pain caused by arthritis and other degenerative conditions.

Rosemary is fantastic to aid digestion; it can ease stomachache and promote adequate digestive health. It could also help prevent stomach ulcers and constipation.

How To Cook With Rosemary

Rosemary is one of the famous Herbs de Provence that has taken the French cooking to legendary levels; it’s widely used in Italian cuisine; it’s used to flavor butter and it’s the main seasoning in the well-known focaccia bread.

Roast chicken is one of the most famous dishes to season with rosemary, but the herb is so fragrant it is commonly used to season intensely flavored meat like rabbit and other game.

Cooking with rosemary is quite easy, but it’s also easy to overdo it, so add the herb a little at a time, and taste as you cook.

Rosemary is a Symbol of Remembrance

Many people use rosemary in their weddings, as it symbolizes love, happiness, and loyalty, and it’s also present in some funerals for the same reason. Rosemary is filled with symbolism, and it’s deeply linked with our culture and beliefs.

Having said that, rosemary is delicious, and no matter what’s for dinner, you should always have some in your pantry.

I try not to have favourites but I’m going to say it. Rosemary is one of my favourite garden herbs! Here’s a little round up of its medicinal virtues as promised. It’s not exhaustive but I hope it gives you an introduction.

As well as traditionally being associated with youthfulness and improved memory, Rosemary gently supports the digestion and the circulatory system. It relieves tension and lifts the spirits. It’s a mild pain killer and sedative too.

More recent in vitro research has shown that it has antiviral properties against influenza viruses, along with herpes viruses and HIV. It is thought that this is due to the oleanic acid that it contains. I’d prefer to consider the whole plant as having antiviral activity rather than just one constituent.

Rosemary can be made into a lovely cup of tea. Simply add a a section about 3” long to a mug, pour on boiling water and leave covered for 5-10 minutes. Covering your brew while it’s steeping prevents the aromatic constituents from being lost and maintains the heat so that there’s the best possible extraction of medicinal components. It’s really nice to include a small sprig in a pot of ‘garden tea’ at this time of the year.

I choose Rosemary frequently in my practice, usually as a tincture blended with other herbs in a tailor made prescription. I also make a topical preparation mixed with Nettle seeds as a potent topical anti-inflammatory for arthritis in smaller joints such as fingers and toes.

Don’t you just love this plant?

Caution: Avoid Rosemary if you suffer from seizures

🌱 It's a beautiful time of year for starting to stockpile dry herbs 😍. Picking them in the morning on dry warm days when the volatile oils are high is said to be the best time. I bundle them together with compostable string and hang them on a bamboo cane outside for an hour or two for any bugs to relocate... then they hang over my kitchen sink (suspended between two cupboards) by a shady window to dry out. I will do this every week or two now for a few months. Here I am drying:

This pruning helps to stimulate new growth and keeps the plants bushy and productive 🙌. Are you a #herb saver? ...

2 thoughts on “What is Rosemary Herb & Its Mediterranean Roots”