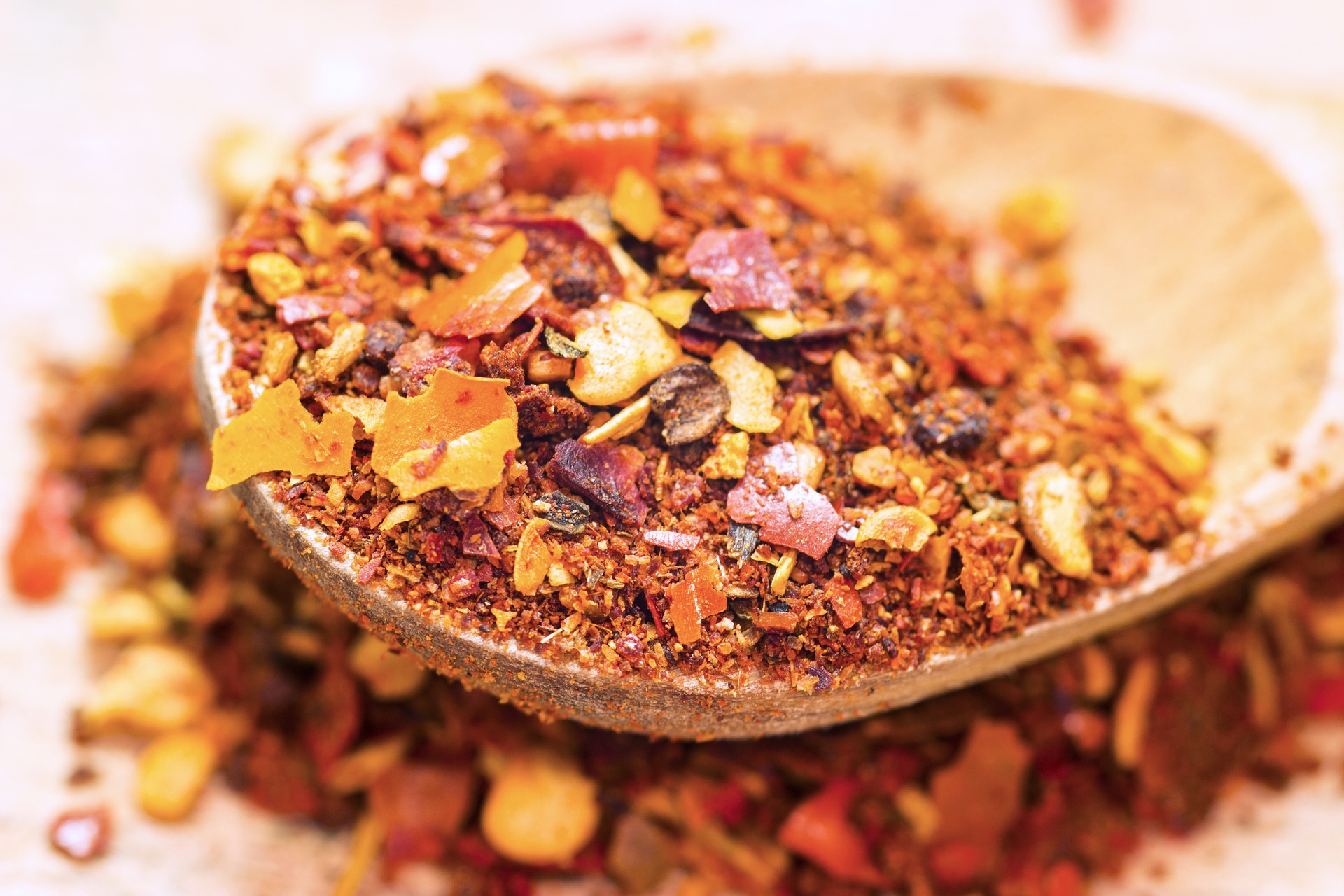 Mexican food, though, is not as spicy as many people think. Compared to others, like Indian cuisine, Mexican food uses spices mildly. The country’s food is often hot, yes, because chili peppers are widely used, but other than that, the country’s cuisine is light on seasonings.

Nevertheless, the spices used make all the difference in flavor and aroma, and it’s a good idea to get to know them better. Here are the top 5 Mexican herbs and spices, the heart and soul behind our favorite Mexican dishes.

Oregano is a Mediterranean herb, and you’ll see it in Greek, Italian, and many other Mediterranean cuisines. The aromatic, wide-leaf herb arrived in Mexico in the 16th century with the Spanish conquerors and soon became popular.

Perhaps not the most used herb in the Mexican repertoire, oregano does play a special role in iconic dishes such as the large-grain corn broth called pozole.

With a chicken or pork-based broth, the soup has a fistful of corn grains, but the magic happens at the table. People customize their pozole bowls with shredded lettuce, fried tortilla, spicy salsa, lime juice, radishes, and, most importantly, oregano.

Mexico is all about hot peppers; if there’s no spicy sauce at the table, then it’s not a proper meal. Eating chili peppers from breakfast through dinner is customary, and around 20 different hot pepper varieties abound, from the mildly spicy jalapeño to the fiery habanero.

When dried, chili peppers become an authentic spice that can lift the flavors of any dish. The most common dried peppers are the ancho, chipotle, guajillo, arbol, and piquin.

Each pepper has a unique flavor profile, and they all offer different spice levels. It takes some serious skill to cook with chili peppers, but the result is always well worth it.

The hoja santa or ‘holy leaf’ is a large, bright green leaf native to Mexico and South America. It grows in the highlands, the damp forests covering central Mexico and its Atlantic coast.

If you’ve ever heard about tamales, the famous corn dough steamed dumplings; then, you’ll probably already tasted hoja santa, which gives flavor to some varieties. Think of eucalyptus meets anise or mint; that’s how this aromatic leaf tastes. It’s especially tasty when used to wrap fish or other seafood specialties.

The fact that the holy leaf is not widely known is a shame because the world could certainly benefit from its delicious flavor.

Axiote is the Mexican name for the bright red colored annatto seed. The condiment is so intensely colored, it’s used as a pigment in the food industry, but in Mexico, it’s used to give life to at least two of the country’s greatest dishes, the pastor-style tacos and Yucatan’s cochinita pibil.

Both pork dishes, pastor tacos are the most popular taco styles in Mexico City, the meat is cooked in a vertical broiler similar to a kebab. Cochinita, on the other hand, is a whole hog cooked in a ground pit oven, and annatto gives it a lovely red color and an earthy flavor hard to match.

Not many people know this, but vanilla is a Mexican spice. The orchid has gained global recognition, being one of everyone’s favorite flavors, but it’s uniquely Mexican at its core. Today, Mexico is the fourth-largest producer of the decadently aromatic spice behind Madagascar, Indonesia, and China.

Real vanilla beans can be expensive, though, since each pod has only a teaspoon of vanilla paste. Don’t confuse natural vanilla with artificial flavorings, that today are much more popular; the real thing is unforgettable.

With thirty-two independent states, Mexico has many regional cuisines. Food is not the same on the warm, sunny coasts as in the inland arid deserts, the mountainous landscapes, or the tropical south. Every region has its herbs and spices, and we could even say every household has its preferences.

Explore Mexican food through its herbs and spices. You’ll soon become an expert, and one bite at a time, you’ll be able to infuse your food with the festive Mexican spirit. Let’s get that Fiesta started! Did someone say tequila?

🌮💥GIVEAWAY TIME💥🌮. I’ve partnered with jefeminneapolis to give TWO lucky winners each a $50 giftcard to enjoy some of their tasty Mexican bites including street tacos, shareable plates, entrees, & some of their signature margaritas or flights!
•••••••
TO ENTER:
1) LIKE this photo
2) FOLLOW me eatswithjason & jefeminneapolis (MUST be following us both to enter!)
3)TAG friends in the comment section below who you’d like to enjoy some delicious food & drinks with! (EACH NEW SEPARATE TAG = a NEW entry, unlimited entries allowed)
••••••
*Must be a Minnesot resident
*Pegram rules, this promotion is in no way sponsored, administered, or associated with Instagram, Inc. By entering, entrants confirm that they are 13+ years of age, release Instagram of responsibility, and agree to Instagram’s terms of use.
*I will randomly pick & announce the winners via my Instagram stories on Tuesday, December 6th. GOOD LUCK! {AD}
••••••
📸: Mahi Mahi & Tinga tacos, guacmole con tortillas fritas, birria de res, & esquites, yuca fries, vegan chorizo taco, Chocolate mousse. Blossom spiritz & old fashioned margarita with tajinn rim, enchiladas, & chocolate mousse dessert.
••••••
#tacos #minneapolis #mahimahi #foodphotography #foodstagram #foodstyling #foodart #colorful #foodlover #foodgasm #foodpics #foodshare #forkyeah #eeeeeats #eatingfortheinsta #foodforfoodies #foodforthought #nomnom #foodie ...

4 thoughts on “What is Mexican Spice”