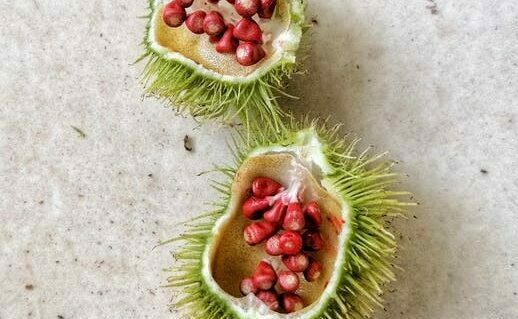 What is Annatto Spice, And Is There A Good Substitute for Annatto Powder?

Food is not only flavor but color, which is why the food industry made it a habit of adding artificial colorants to our food, but that doesn’t have to be that way.

Natural coloring agents are available if you know where to look, and they’re becoming more common every day. For red, it’s all about annatto.

Annatto is not only the most effective all-natural red pigment on the planet; it infuses food with the most pleasant of flavors. Here’s all you need to know about annatto, what is annatto spice, and substitutes for annatto powder.

What is Annatto Spice?

Annatto is a spice or condiment derived from the seeds of a fruit, and that fruit comes from the Bixa Orellana, achiote or axiote tree. The tropical tree is widely grown in the Mexican and Brazilian rain forests, and its seeds are coveted for their uses in the food industry. They’re also common in traditional cooking in Mexico, South America, the Caribbean and the Philippines.

Orange and red pigments are scarce in nature, which leads industries besides food to make use of annatto. The cosmetic industry refers to the tree as the ‘lipstick tree,’ Don’t be surprised to find the condiment listed even in your most expensive makeup.

Annatto is a fabulous source for antioxidants, including flavonoids, tocotrienols, terpenoids and carotenoids. These compounds can prevent oxidative stress caused by scavenger free radicals floating in your bloodstream, damaging tissue cells, even at a DNA level.

Scientists must conduct more research, but annatto might be effective in suppressing cancer cell growth and could be effective against pancreas, prostate and liver cancer.

Carotenoids, which are well-known health compounds found in squash, carrots, grapefruit, oranges and apricots, are also present in annatto, and can promote eye health.

The red condiment has antimicrobial properties. Some test-tube studies have proven the spice can inhibit growth in several harmful bacteria. Other studies have shown successful results against dangerous unicellular fungi. These properties can extend the shelf-life of food products naturally.

According to the US National Library of Medicine, annatto, or achiote, is a tasty spice with noticeable health benefits, but it’s also nutritious. Annatto is 13-17% high-quality protein. It is also made of 16% dietary fiber. Phosphorus, a rare, vital mineral, is well represented in the condiment too.

The red spice is also a source for tryptophan, an essential amino acid essential for adequate brain function and Lycin, a building block for proteins.

Annatto is a looker, the condiment’s color is prized, but so are its spicy and earthy flavors. Dishes like the famous Cochinita Pibil, Yucatan’s flagship pulled pork dish, depends on axiote, as Mayan descendants in the region call it.

Achiote Chicken is a comforting, home-cooked South American meal, and it’s all about annatto too. The famous ‘al pastor’ tacos, or Sheppard-style tacos, the most popular renditions of the Mexican dish, is also red-hued by the condiment.

Annatto is not only present in tropical cuisines; all orange-colored types of cheese, including American cheese, Cheddar, Cheshire, Mimolette and Red Leicester, can thank the red seeds for their color.

All kinds of pastry products, yogurt, fruit concentrates, and 70% of red or orange foods in the supermarket, are kissed by annatto in some way or another.

Cooking with annatto is easy. You’ll find the seeds in the form of paste or powder, and adding it to marinades, soups and stews will give your food a lovely red hue and an enticingly spicy flavor.

Is There Any Substitute for Annatto Powder?

The better substitutes for annatto powder are turmeric and paprika, but perhaps they work better when combined. Both will add spicy and earthy flavors to your food and will taint it with bright colors.

Where to Shop for good quality Annatto

The good news is that you can easily find annatto online and in Mexican specialty stores. It’s as widely available as its substitutes.

If you are looking for Annatto seeds, then check out this link for a good option.

The famous Achiote (Bixa orellana) is one of the most common plants you can find in the Magdalena Valley and other lowlands of Colombia.
This is one of my favorite families: the Bixaceae family in which two other genus with very showy flowers such Diegodendron (as my Ig name), and Cochlospermum are included.

The family is completely Neotropical, and they all have extrafloral nectaries (secondpicture, at the base) these structures produce sugars and are only activated when the plant produces flower buds, and when the fruit is still immature.
All this to produce a symbiosis with ants, while the plant feeds it with sugar, the ant defends it from predators.
Apart from all this, the main use of B. orellana is to produce a non-toxic tincture known as annatto, this is obtained from the seed sarcotesta; the pre-Columbian natives used it as ceremonial stain, skin protector, and like today it was also used as a spice and food coloring, so it is widely grown outside the American tropics.

Making colours with Annatto seeds (Bixa orelliana) again. I used 30 grams of seeds to dye merino wool yarn ( with some cotton twine) that weighed 500gm and all these shades were produced!
My dye methods are very simple, no chemical mordants or modifiers involved, just good old traditional peasant knowledge!
Besides using high quality natural fibres, all you need is a decent amount of reliable dye, water and most importantly, patience. The shades of colours simply depend on how long the yarn is left soaking.
These threads are for personal use, for my current embroidery projects. There is Annatto available on the website if you want some. Im working on some other dyes that will be available shortly. Thank you for all the support. #naturaldye #annatto ...

#WhatsBlooming - Did you know that annatto, an extract from the seeds of the lipstick tree (Bixa orellana), is used as a colouring agent for foods, fibres, and even cosmetics? You’re likely to even have taken butter, margarine, or cheese coloured with annatto! Its usage can be traced back to the ancient Mayan and Aztec civilizations! Find this eye-catching shrub along the Garden’s lake perimeter along Marina Gardens Drive.